Our stint in Seoul was coming to an end; after two days of running around, we were tired but still aiming to cram as much as possible into our final day in Korea’s capital.

Our first stop was lunch (we slept in a little that morning). As a result of the abundance of food we had ordered and/or were served in Ohseagyehyang (오세계향) (see the Gyeongokbung Palace blog post for more information), I decided that my lunch would be yesterday’s leftover dumplings and Sichuan spicy noodles, whilst Anna and my travel companion went on the hunt for food. We found a restaurant called Eunseong Calguksu for lunch, a traditional Korean eatery whereby my two companions ordered Calguksu. Calguksu is a noodle dish originating in Korea, which consists of noodles in a fish broth (or some other form of meat broth) with vegetables and long egg noodles.

The area where the Calguksu restaurant was

After lunch, we grabbed a quick coffee before getting a bus from near the restaurant and heading towards Bukhansen National Park (which took about an hour and 15 minutes) to do some hiking. Because of our lack of climbing experience and the fact that we didn’t own a single cagoule between us (let alone three), we took an easier hiking route which meant that we missed a lot of the best views that exist further up the mountain. Unless you can climb that far up and are incredibly well kitted out (which we weren’t- climbing gear is not cheap), the views are not unbelievably impressive. However, the hiking route was very pleasant nonetheless, and a nice contrast to the urbanised and high-paced lifestyle we’d been living in Seoul until that point. 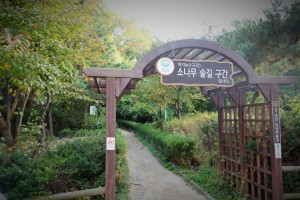 The entrance to the walking route and map of the area 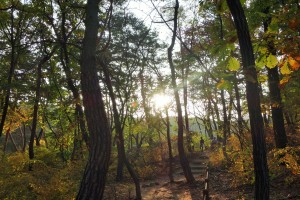 A view whilst hiking and the leaves we stumbled across

Interesting graffiti in the park

We found a cute little coffee shop near the park at the end of the hiking route. Here, we ordered some food and drink (a lovely onion bagel with Philadelphia and a peppermint mocha) and just relaxed and chatted. We were considering what to do that evening; a large part of me want to visit the Gangnam district (and I won’t lie, that infamous song by Psy definitely had something to do with it) but in the end we decided to head to the Dongdaemun area- reknowned for its late night shopping and upbeat ambience.

We returned to Gongjon restaurant (the Vegan restaurant we visited on the first evening- see the “A little sample of Seoul” blog post), located in the Dongdaemun-gu region. When we arrived at the café, it was crammed full of people- with lots of gorgeous dogs running around as well! We quickly deduced that this must have been an animal rights/lovers, vegetarian or vegan or pet-owners meet up (sorry guys, we weren’t detective enough to find out which, I think the former). Fortunately, the owners had enough space to squeeze us in so, like the carefree tourists we are, we gate-crashed the gathering. Dinner was good, but spicy was an understatement! Last time I ordered the tomato and burdock spaghetti- lovely, but with a definite kick of chilli. This time, under the recommendation of my travel companion who thought it would be less spicy, I ordered Aglio e Olio Pasta. After all, I thought, how spicy can a garlic and olive oil pasta be?

One word, my friends. Jalapenos.

And yes, the flavours were great but my mouth watered and tears were forming in my eyes and I got through my raspberry squash at a record pace.

What was bittersweet about this meal, though, was the fact that it was our Seoul goodbye to Anna (although we were seeing her in a few days in Daegu).

We gave her our gifts, a white patterned umbrella from Osaka and two hand-picked pearls from a stall in Cheung Chau (where we were also able to choose what silver pendant we wanted the pearls to be set in- see “Cheung Chau: sunshine, seafood and street stalls”).

After some shared sentimentality, we hailed a cab onto Dongdaemun. And wow- what an amazing vibe!

Dongdaemun shops lit up at night

Lit up like a Christmas tree, with blue lights radiating outside one building, stairs lit up with black animated figures walking across them and the DDP (Dongdemun Design Plaza) festival in full swing, the shopping district managed to effortlessly encompass a clubbing and nightlife vibe, with bars and clubs being replaced by shops- both high-end and bargain priced. Music was being blasted out from a stage, where a band were performing and multiple people were crowded around. Street stalls were selling all sorts of foods- from twisty potatoes to sausages and doughnuts to waffles. 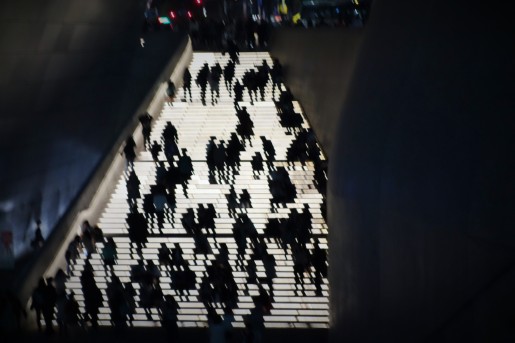 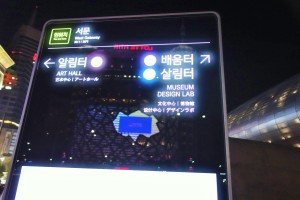 We first walked around the expensive shops and, despite finding some avant garde and genuinely gorgeous pieces, our wallets were not going to stretch that far. We walked down the street a bit to a building selling every kind of clothing imaginable alongside bags, shoes, souvenirs and accessories. The format was that of a market, spread out like a shopping centre; a range of stalls selling similar types of item existed on each floor yet each stall was manned by different people and stall owners. In spite of their unwillingness to smile, Anna managed to find herself some wonderful shoes for work and a very smart watch. The pricing was okay- not the cheapest but definitely affordable- think shops like New Look and H&M (with perhaps some clothing shops undercutting these prices slightly).

Although a big part of us wanted to stay out late (the 5am closing time hung over us- the huge temptation being staying out until that time purely to shop), we had to be sensible. An early flight out of Seoul to Jeju Island- combined with the fact that we hadn’t repacked our bags yet- meant that after a few hours, we returned back to the Blessing Hotel to pack. Spurred on by some excellent 90s hits (thank you Youtube) we packed whilst wondering why no boy band currently comes close to matching “Backstreet’s back- alright”. When we got to Britney, we realised that if our neighbours could hear us and didn’t grow up in the 90s, we were probably responsible for their suffering. So apologies if you’re reading this blog post 🙂

Stay tuned for Jeju Island, a hidden gem (at least to us Westerners, it is apparently a popular tourist destination to Koreans and Chinese people) which turned out to be rather enjoyable!

As always, thanks for taking the time to read this entry- I really appreciate your continued support.

2 thoughts on “Calguksu (칼국수), hiking and staying up for shopping in Seoul (clearly all cities should have shopping until 5am)”