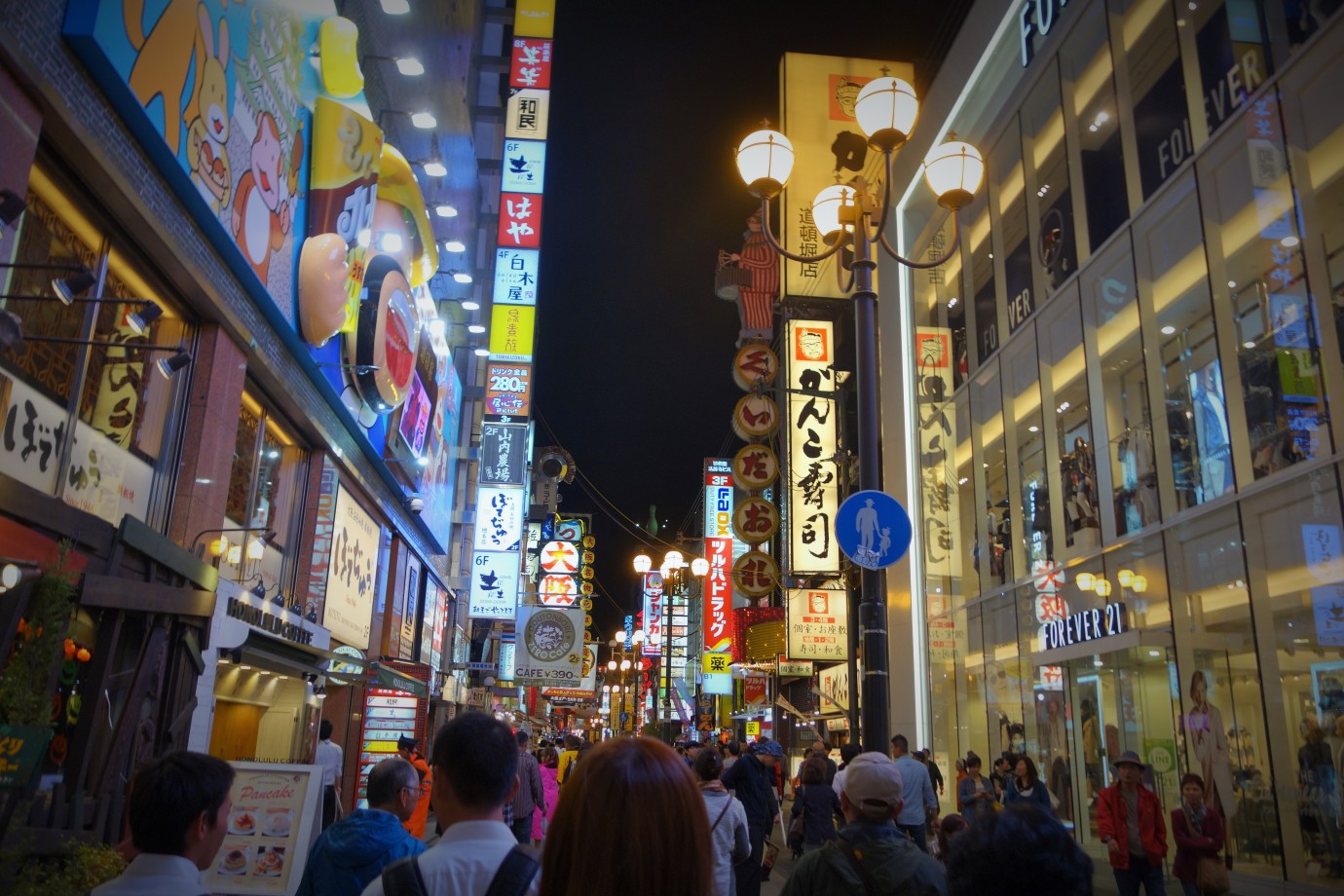 Osaka was our final stop in Japan; to get to the place that some have labelled as a “must see” for food lovers, we got the train from the main Kyoto station to Osaka station, which only took half an hour (fifteen minutes if you get an express train, but we preferred to save a few hundred yen). On the first impressions, Osaka seemed promising- the sun was shining as we approached the region, and the rural surroundings, interspersed with some buildings, appeared much more akin to what I initially expected from Kyoto than the more commercialised Osaka.

All was well and good until we reached our hotel. We’d stayed in a variety of places thus far- some poor (our Ikebukuro place had a hole in the floor and windows that wouldn’t shut properly), some good (the place we moved to when we figured our room wouldn’t withstand a typhoon that was due to hit that night in Tokyo) and some perfectly satisfactory (where we stayed in Kyoto, which was a clean place to rest your head, and did provide Wi-Fi in the lobby area). However, the Livemax Namba (the English name that our Japanese hotel is far less commonly known by) was a tad nightmarish. The reception was cold, barren and (in an attempt to seem upmarket) marble, with two outdated sofas, Japanese T.V playing in the background and a ludicrous set of rules (for example, a 9000 Yen penalty if you lose your room key- they therefore recommend you hand it in at reception every time you leave the hotel). We took the elevator to our room on the 8th floor of an outdoor, stone courtyard which brandished an array of repugnant smells. One day we inhaled L’eau de Manure, another day the scent was more like cat urine and well… you get the drift. The room itself was unbelievably stuffy, but the air conditioning emitted cigarette smoke scented air (in an apparently non-smoking room) so we had a little bit of a catch 22 situation regarding whether to put aircom on or not. They do say that you get what you pay for though (or less in this case, but we were travelling on a budget after all). And with reference to redeeming features of the hotel, there were some: the location was not awful, since we were in walking distance to Sakuragowa station (part of a pretty decent metro network around Osaka) and the furnishing of our rooms was fine too. And remarkably, this was not the worst place we stayed (just you wait until the Guilin blog entries). Hotel aside- food was still a big issue for me in Osaka. What had got 10 x better in Kyoto (though still not easy per se) became 100 x worse in Osaka. We weren’t near many restaurants, and the nearby ones offered no vegetarian options. But we did have a supermarket near us, so I dined on fruit and Kitkats that night (to be fair, there are worse dinners) whilst my friend had a microwaveable meat fried rice and some similar noodles with an egg on top (kudos to the room, we had a microwave since the hotel had no dining facilities). Kirin beer provided us with a mini treat after a long day.

THE HUNT FOR WIFI

The next morning we headed out to find a Starbucks (as nowhere in our hotel had Wi-Fi, which was causing big issues regarding planning and blogging). We got the train from Sakuragowa and changed onto the Midosuji line at Namba station to get to Umeda and Osaka. We found a Starbucks… but this one had no Wi-Fi. Nevertheless, a mushroom and mozzarella tartine and coffee provided me with my veggie-safe lunch and the hunt for wi-fi began. I’d be lying if I said it was easy, but eventually we headed into a large electrical shop with my travel companion locating a free International Travellers’ Hotspot Wi-Fi sign. We headed to the basement floor whereby it transpired that simply showing your passport could give you a username and password that would allow your to access internet publicly in places like train stations and McDonalds (it didn’t always work in train stations, but worked at other times). This was something that Osaka offered which really impressed me, so should you find yourself without Wi-Fi whilst there, take advantage of the scheme.

Like Tokyo, Osaka has a Pokemon Centre. Though I watched it a bit when I was younger, I am by no means a Pokemon expert. However, my travel companion was keen to go and sure enough, I was really impressed by the store. Whilst I’m sure some of the memorabilia and souvenirs were lost on me, the shop impressed by selling everything from traditional (and rarer) trading cards, to Pokemon Macaroni and IPhone cases. The shop itself was a riot of primary coloured souvenirs amongst a cream backdrop and consisted of some excited adults who were clearly lifelong fans. And being here gave me the chance to pick up two birthday presents for my travel companion, who celebrated his birthday on the 5th November in China (blog on that day coming soon).

The entrance to the Pokémon Centre

During day 2 we took a trip to Mount Koya; there is one big reason why I won’t go into this too much- Mount Koya, compared to somewhere like Arashiyama, did less for me in terms of attractions and was somewhere I found to be less fufilling. However, parts of the Mount Koya area were interesting, so below I’ve compiled a visual album and brief description regarding what we got up to while we were there: 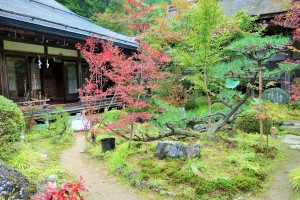 Pictures from Shojoshin-in temple, on the way to Koyasan Okunoin

A pathway going through the Okunoin Cemetery/Koyasan Okunoin

The temple which consisted of the Hall of Lanterns

Today was a day for shopping (and to be fair to Osaka, quite a few good purchases were made) and the opportunity to visit Dontonbori, the area of Osaka renowned for its street food; this included Takoyaki (dashi flavored batter filled with octopus, tempura, green onions, and pickled red ginger, usually served with takoyaki sauce and Japanese mayo), something my friend was keen to try. After doing some shopping in the Osaka station region, Anthony and I went somewhere to try okonomiyaki, a pan fried dish consisting of batter and cabbage (the other ingredients vary depending on what you order it with). My friend ordered pork, spring onion and mayonnaise and I went for tofu, cheese and egg. We watched the food being cooked on a griddle in the centre of the table. A note for vegetarians- although the okonomiyaki I ordered was completely veggie safe, the girl cooking the dishes sometimes went to use the same utensils for both the pork and tofu oknomiyaki if we didn’t remind her in time, so keep tabs on the cooking of the dish just in case 🙂

The restaurant we ate at 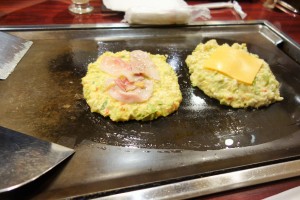 Our okonomiyaki being cooked

It was okay taste-wise for me- my friend chose to top his with BBQ sauce and mayonnaise, which would undeniably add a stronger hit of flavour but I refused the additional sauces on the basis of “better safe than sorry.” Nonetheless, the experience itself was really cool- I enjoyed watching the okonomiyaki being made right in front of us, hearing the sizzle of it cooking and inhaling the scent of the spring onion in both variations of the dish.

Next we went on to Dontonbori, the place famous for all its street food and a key reason as to why my travel companion wanted to visit Osaka. Lit up like a Christmas tree, and full of street food vendours, my friend soon found himself in front of a Takoyaka stall (ocotopus and egg pancake balls described earlier). Despite the promising smell, he said it tasted disappointing (he binned it) and so we walked down the stretch looking for other things we might want. We were let down by a lack of variety (despite many vendors selling similar types of food) and in hindsight, what lowers my opinion of Dontonbori a little bit more was that some of the food markets we saw in Xi’an, China, were less famous yet more impressive. We mucked around in a small arcade down the Dontonbori stretch for a bit before inadvertently stumbling into an area where many massages were being offered alongside lots of hotels. We doubled back on ourselves and tried to find the Ezaki Glico marathon runner, a picture which was meant to be popular with tourists, and is owned by the same company (Glico) which owns popular Japanese snack foods- Pocky and Pretz amongst other things. However, we were tired at this point, and subsequently unsuccessful. So for us, Osaka was a bit of a let down. Granted, we didn’t see everything the area has to offer, but we did what we could considering our location and the fact that our primary reason for going there was food. On that front, both of us were underwhelmed. I guess I wanted to write this blog entry to show that as much fun as we had when travelling, not everything runs smoothly and you won’t necessarily love everywhere you go (but if you do, I’m incredibly jealous). As a reader of other blogs, I know that positive cheerful blogs are normally the more fun read, and I do love writing those blogs personally, but I also want to record experiences as accurately as I can. Thanks for reading my Japan blogs- next I’m going to upload posts on the South Korea stretch of our trip, which was very different from Japan! We got the chance to see Seoul, Jeju Island and Daegu. As always- your continued support means a huge amount so thank you for reading!!!