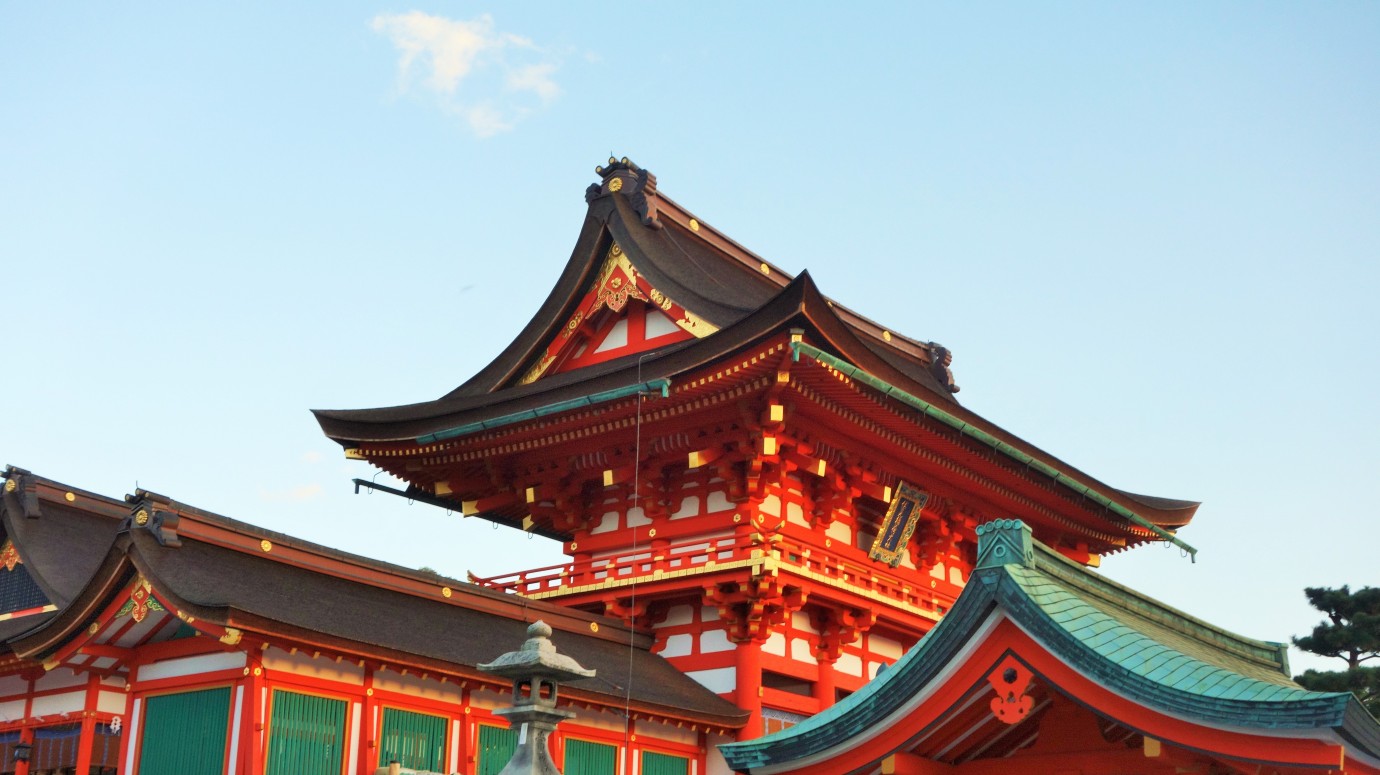 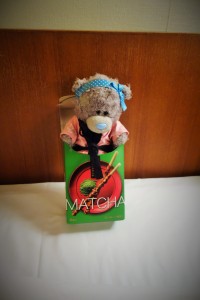 The tea ceremony was something that I had been excited for prior to Japan. Hailed as a personal ceremony in which we would acquire knowledge and be able to experience how Japanese tea is typically prepared and consumed, expectations were high. Our day started off fairly slowly- we looked for a vegetarian place called Mumokuteki Café and Foods to eat lunch but were unable to find the place, so ended up at our old safety net (where I was guaranteed at least one type of vegetarian food)- Starbucks. Following our over-sugary stint in what had become our saviour of a coffee shop, we changed into warmer clothing (since the weather had cooled substantially during the early afternoon) and went to the Kiyomizu Gojo Station, where we took the Keihan Main Line towards Demachiyangi and got out at Gion Shijo Station.

Organised under a company called EN, finding the tea ceremony could have been easier. Though informed on our tickets that access to the ceremony would be near the side entrance of the Chion-in temple, the problem arose in that a) we had no idea whether the entrance we were at was the main entrance or the side entrance and b) passing locals and tourists also seemed to have no idea. In the end, we arrived at the ceremony 3 minutes late, but were fortunately let in since we would have otherwise had to wait a further 45 minutes to attend the next ceremony. In our mind, the “intimate” ceremony we were told tea-making would involve would consist of 4-6 people. Instead, picture 16 of us crowded and sitting cross-legged in a narrow, dark, Japanese-style room. My travel companion and I were sitting against the door, and a couple of Asian tourists in the centre of the room were more interested in sniggering at certain points than the ceremony itself. The woman holding the ceremony was knowledgeable and clad in traditional attire, which was a positive. But I did not enjoy making the tea, and drinking it was adequate at best. Before preparing the tea, we were supposed to eat a cube saccharine-tasting jelly sweet dusted with sugar but not everyone chose to complete this instruction. I also had a poor whisking action apparently, whereas my travel companion mastered it. The moral of the story is- never ask me to make you a cappuccino… I can make you a decent cup of English breakfast tea (I hope) instead though 🙂

During the ceremony, my emotions transgressed from grumpy (when I saw how busy the ceremony was), to incredulous (tea-making was clearly an art, and the way it was presented to us was doing no testimony to this fact) to amused (at how some of the other attendees were reacting) to finally exasperated. The thing that I had such high hopes for was a bitter (and bitter tasting in terms of the tea) let down.

My friend and I were sitting outside Chion-in temple trying to decide what to do next; we hadn’t finalised plans for that day so it was up in the air as to what we should do at that point. I suggested we get the train to where the Fushimi Inari Shrine lay, since this was awarded the accolade of number 1 attraction on Trip Advisor and that site has been my kindred spirit online whilst travelling (alongside Happy Cow- love you Happy Cow). We got on a train again from Kiyomizu Gojo Station and ended up at the wrong station since we accidently took a lim exp (limited express) train compared to the local train we needed. However, doubling back on ourselves was easy enough and in no time, we ended up back at Fushimi Inari. We arrived in fairly good spirits and, when walking past a tour group, my friend exclaimed “I scream, you scream, we all scream for ice cream”, leading an older British woman to remark “Gosh, I haven’t heard that in years”. Amused, we carefully skipped past the tour group and approached the walkway leading up to the shrine entrance. To our left, stalls were selling grilled meats and pineapple sticks, and every few metres, a green flag proudly waved at us, reminding us how the shrine had been voted the number one attraction on Trip Advisor. 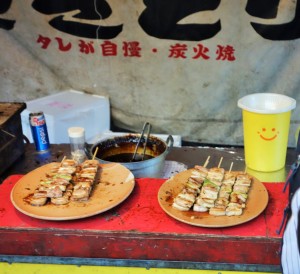 I’m not really sure what my first impressions were- my friend said “stunning but ridiculously touristy”. The entrance consisted of a number of large pillarbox red buildings. 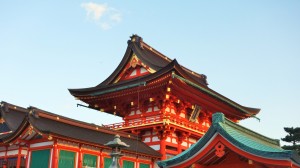 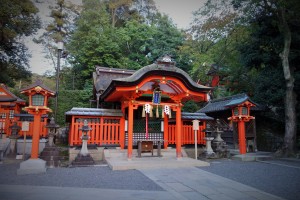 We ascended up a number of stairs before our eyes met the start of the Fushimi Inari gates and the subsequent footpath that followed.

The beginning of the Fushimi Inari Path

At this point it was early evening and as we progressed through the makeshift tunnel of red arches, people were starting to leave the path, passing us in the opposite direction. It became more peaceful, easier to take photos and more mysterious, even slightly eerie. The now dark red (when light was absent) columns were majestic, stacked continually into the distance. We kept walking and climbing and walking again until we reached 15,500m on the path.

Though we were by no means at the end of the path, by this point we were losing light rapidly, some areas around us had been plunged into darkness and we hadn’t had anything to eat since midday.

A list of heights that the Fushimi Inari Path can reach

We followed a different route to leave the path and though this was poorly signposted, we discovered other statues, shrines and monuments along our route. Part of the way there, a cat started walking in front of us and stayed with us for a while (a number of cats are present around the various shrines in Fushimi Inari). Although we knew we were close to the entrance, we were a bit unsure of where to go at one point but my friend’s years of watching Japanese anime and general aptitude for languages meant he was able to ask a local and understand the Japanese word for left, leading us back in the correct direction.

Was this one of my more inept days? Probably.

Was this one of our more fun days? Definitely.

Dinner that night was at the glorious Maharaja (see my veggie bites blog post for a summary of the restaurant). To access this Indian Food haven, hop onto the Kiyomizu line again and disembark at Gion Shijo Station. We ended the day back at where we are staying watching a few episodes of the trashy reality youtube show we’ve become hooked on (don’t ask what it is- you will become addicted and time is too valuable) and, for me, writing diary entries.

I like days that go well, but my appreciation soars when a day starts sour and gets progressively better as it continues. Kyoto was not just matching Tokyo but overshadowing it by a considerable amount, and our impressions of the place (with Zenrin-ji yesterday and Fushimi Inari today) were becoming more and more favourable.