If you told me that during one of my days travelling, I’d stumble across a strange place in between Hakone and Tokyo and, this being totally unplanned, would lead to one of the best days I’ve had in Japan so far, the organiser in me would have snorted. But alas, my friend and I found ourselves in this strange place called Odawara on a “travel” day (getting back from Hakone to Tokyo), decided to have a roam around and subsequently gatecrashed a festival filled with locals, saw a castle, and got drawn into a Japanese football game whilst eating some of the best pub food I have ever eaten. This is the story of the day that makes me smile the most out of all my “Tokyo days” (next posts will be on Kyoto). This was the day we discovered Odawara.

The morning started off really well- we were checking out of the Hokane Kowakien hotel and had some breakfast/brunch (a lot of days we’ve skipped this meal due to an early start or sheer tiredness). And this might sound really melodramatic, but being able to have toast with butter and strawberry jam was a total luxury for me (especially due to the struggle to find vegetarian food). And I caved into temptation and got an éclair. After my friend indulged in an overly cheesy pizza and we were both feeling nicely stuffed (again a contrast to the hunger pangs I’ve had at times in Japan), we walked to the local train station and hoped onto a train to Odawara, with the intention of heading straight back to Tokyo.

We found Starbucks in Odawara with the intention of getting some wi-fi and looking up what we could do in this completely novel place. And we failed- there was no wi-fi in this branch. However, we soon stumbled across a map at Odawara station which listed some local attractions and my friend mentioned how the Soshu Odawara Castle rang a bell and maybe we should check it out? So we left the station and my initial first impression was… meh.

But then we walked on, and we found a brilliant bright orange building, an irish pub called Celts (my friend joked “we’re going there” and I laughed at the time), a café in a department store which served “safe” veggie food and finally, best of all, a gorgeous lake with a bridge leading across it and the sounds of people and music drifting from the archway on the other side of the bridge. 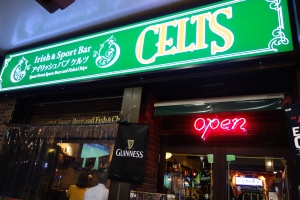 The pub. More about that later 🙂

Upon entering the archway, the dulcet sounds of a Japanese rock band met our ears. Heaps of local people were milling around-watching the band, eating, shopping and chatting to each other. Although we were obviously tourists, the people and ambience were incredibly friendly.

My friend and I picked up a soda we had found at one of the festival stalls (the same kind of soda we had in Asakusa- see Tokyo Time Part 1 blog entry if interested) and meandered around the stalls which displayed an array of items including glass bottles (like cola bottles) shaped as vases and a number of kitchen items. Such items in particular were coveted by my friend, who said he would have brought them were he heading straight back to Hong Kong (our next country is instead South Korea).

It materialised that we had arrived at the Soshu Odawara castle through the back entrance. As we walked through the gardens, we came across these little fellas:

Makes a change from Carp 🙂

The pathway towards the main castle

We eventually came across the castle itself: a huge, cream coloured, Japanese style building. 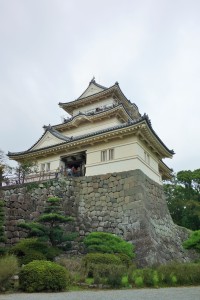 Soshu Odawara Castle- the first views you get

We paid 450 yen each for tickets around the castle and walked through a number of the levels. Exhibits were very interesting but photography was unfortunately prohibited in some places. We climbed the stairs right to the top of the castle and managed to get some pretty decent views of the Odawara area. 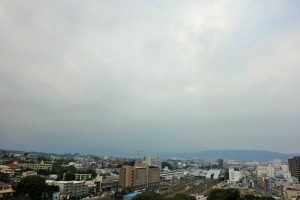 Odawara from the top of Soshu Odawara Castle

By this point, we’d got hungry and because of how difficult finding vegetarian anything is in Japan, my friend suggested we head to the Irish pub. So, with expectations low (because I guess the patriot in me could not see how a Japanese Irish pub would be any better than a British or Irish pub) we headed to Celts.

And yes, I was impressed. Very. I enjoyed the Japanese football in the background (although there were times where it was painful watching the teams play- very few goal attacks), I enjoyed my Gin & Tonic (there gets to a point where you don’t fancy Kirin beer) and most of all, we both loved our food. Who’d have thought chips covered in herb with a basil mayonnaise dipping sauce on the side would be such a comfort? Add to that some onion rings (for me) and deep fried mushrooms (my friend) and we both left the pub feeling very happy. The only slight downside is that you can smoke in pubs in Japan so, for me anyway, the passive smoking was not great. But it was a small price to pay for the friendliness and comfort food.

We headed back to Odawara station where were due to get the bullet train back to Tokyo (and yes, that impressed me too- less so my friend who had seen it before). Like the name suggests, watching the train travel past the station created a visual blur and the journey itself was rapid and pleasant. 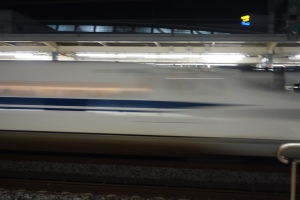 The bullet train in action

Having re-checked into where we were staying in Ikebukuro, we decided to go to Senjo Homemade Gyoza Shop (veggie safe but with meat options according to Vegetarian app Happy Cow). This small restaurant (like a narrow shoebox) had two small tables squeezed into it, a kitchen and posters of glorious looking Taiwanese food. Also, the lady who owned it was amazing: super maternal and understanding. Anyone in Japan who beams upon hearing I’m vegetarian, checks whether I eat egg (I do) and comments on my smile  (bonus) is someone I become instantly grateful towards and fond of.

She brought out lovely Jasmine tea, made me a vegetarian fixed meal (650 yen) and my friend a standard fixed meal and we ate sticky rice, soy plum sauce, a red pepper, spring onion and egg dish and these amazing multi-coloured gyozas (filled with meat for my friend and vegetables for me). She refused to accept a tip and asked us to come back (which we did- the next day). It’s so lovely to meet people who genuinely take pride in seeing others enjoy their food (my travel companion- who is an excellent chef- also does this) and the meal itself provided the cherry on top of what was a really lovely day. 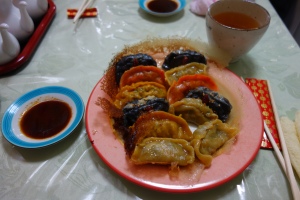