When researching Japan, seeing Mount Fuji was something that seemed very appealing; though not experienced enough (nor, to be honest, within the budget) to do any of the actual climbing, we decided the best way to be able to get to the volcano was by coach tour. This is because getting there alone would have incurred much higher room and transportation costs.

This in and amongst itself was a new experience for me; waking up at 6:30am to make our way to the Hotel Metropolitan- the tour meeting place (as lovely as it is, staying there would have been ridiculously over-budget, especially considering how expensive Japan is), we clambered onto the coach. We faced an early disruption in the form of the couple sitting behind us, of which the women was coughing frantically on automation every 30 seconds to a minute. Neither of us had any cough syrup on us and needless to say after 5 minutes, we had uprooted to the empty back seats of the coach 🙂

Arrival at the coach station was manic, with people jostling in different directions to find the coach they were actually meant to be on. We had to hunt down the Mount Fuji/Hakone bus, but another guy on our initial transfer coach, for example, was off to have a sushi making session. Upon reaching the coach, we were greeted by a larger than life tour guide called Makoto. He was knowledgeable enough, but made (what I found to be) some pretty unsavoury jokes (suicide forest and perils of climbing Mount Fuji). The initial part of the journey, though long, was actually fine upon discovery that the coach had wi-fi connectivity, but also being able to gaze out at different parts of Tokyo and then (after some more roads) look out at the Mount Fuji area. 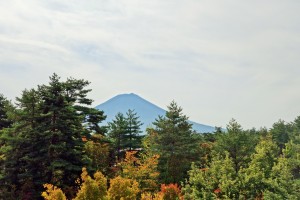 Timing was crucial that day… too foggy and we would not be able to see the views from around Mount Fuji. Rainy, and the large amount of grey and blue in the landscape would have been lost behind a veil of drizzle. Thankfully we got lucky. The sun was shining upon upheaval from the coach, the air fresh, and the views- a beautiful azure coloured sky providing a backdrop to the mountain/volcanic range- were wonderful.

We walked around the souvenir and on-site shops, whereby items as diverse as Fuji canned air (which my friend wanted to buy) to walking sticks and cajoles were being sold. Each of us was given a lucky bell charm, which apparently links to Mount Fuji (I’m ashamed to say I just can’t remember how). We climbed up towards a shrine, whereby you can write a wish plaque and attach it to the shrine, with the hopes that a goddess will grant said wishes. My friend had already done a similar thing in Hong Kong on a Wishing Tree but since I had never done this before, I wrote my wish in chunky black permanent marker and dated it. So if I’m ever fortunate to have my bullet pointed dreams become reality, I guess I know who to thank 🙂

We also enjoyed mucking around in some random tunnels (because essentially, travelling aged 21 is an excuse to be big kids- my friend being the pun-loving little brother, and me- the bossy older sister). 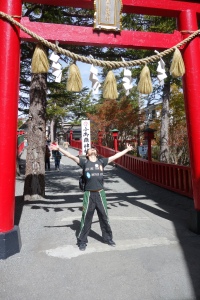 The view that lay beyond the tunnels

We moved on from Mount Fuji just as a murky grey fog was starting to completely obscure the scenic views. Lunch was at a café type place whereby I was accompanied in my vegetarian meal choice by my friend, who was sweet enough to go for the same dish so that there would be no confusion on the part of the tour company. It wasn’t for me, the eight green grapes were okay and if the tempura wasn’t cold, it would have been nice but I think it’s fair to say that we were both very hungry when we moved on. Next was meant to be a boat trip (the Lake Ashi Cruise), but a timing mix up meant we went on the Hakone ropeway (a cable car system) and then arrived at Owakudani sulphur pools first. 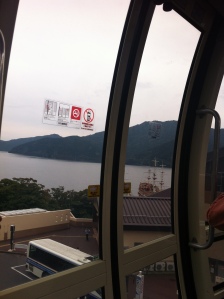 From inside the cable car at Hakone ropeway

A view of Hakone ropeway from Owakudani sulphur pools

The Owakudani sulphur pools from the viewing deck

It was pretty impressive but after a few photos there wasn’t loads to do. The cable cars and Lake Ashi cruise were also nice, but not especially unique to Japan. All in all, it was good to be able to see Mount Fuji, but the rest of the tour was just not as memorable (although some of the people we met were).