Yes, I’m ashamed to admit it, but less than 24 hours into my arrival in Hong Kong and already I’m having a bit of a love affair with the food. The above soups are two traditional desserts which I’m told are popular with the locals in Hong Kong and which I got to sample as a late afternoon snack at Ching Ching Desserts, a dessert restaurant in North Point. Picking a sweet when a) the concept of having a soup for dessert is unfamiliar and b) the menu is full of glorious pages of colourful and varied concoctions definitely led to some feelings of confusion (although this also may have been a result of jet lag). But eventually, having just sat down after being caught in an unexpected bout of rain (and in spite of the heat and humidity), I chose the hot almond and black sesame soup, while everyone else went for black glutinous rice and wheat congee in coconut milk. My travel companion and his mum told me that if you take a traditional Chinese approach to medicine, almonds are good for the skin and thought to “nourish internally” whilst black sesame (which I had never tried before) is supposed to be beneficial to the kidneys, regulating many bodily functions. In addition, the soup was really nice- rich with a creamy texture and akin to the kind of sweet, warm drink you sometimes want to enjoy before going to sleep. As someone who is not a big fan of rice pudding, I was also pleasantly surprised by the black glutinous rice and wheat congee. I think the word “glutinous” made me reluctant about the dish but the texture was similar to porridge and the coconut milk base made it very tasty! The restaurant itself was small, casual and brightly lit, as well as being not too busy.

I also really enjoyed the dinner that my friend’s mum made, lettuce wraps filled with peppers and beancurd with a small bowl of sticky rice. The first snack food I’ve tried in Hong Kong (mango covered biscuit sticks), are also incredibly moreish and so far, I’m finding food to be very light. This means that you can eat something full on flavour without feeling as though you are caressing your very own food baby 🙂 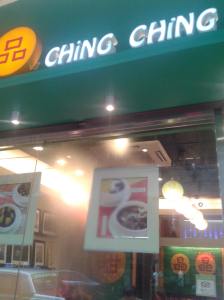 The past 24 hours have been very eventful, mainly because they consisted of a last minute panic regarding packing, saying bye to my parents and sister at Heathrow, an 11 hour flight between London and Hong Kong and submitting a china visa application in Hong Kong.

But the flight itself was a particularly interesting experience. As a girl who has travelled (at most) maybe 4 and a half hours in an aeroplane before now, I figured the flight might be challenging for me. However, I cannot condemn Cathay Pacific. Although I struggled to face my greasy hash brown and omelette breakfast after 8 hours (at that point) on a plane, the staff were helpful, the earlier dinner was was edible, the plane was nice and the woman at the check-in desk was amazing and gave me a better seat than what I had originally been allocated (still economy but with more leg room). So thank you to that lovely member of staff!

On the flight itself, I was lucky as I had another passenger next to me who was very nice, and who I ended up chatting with. And after 4 hours in the air went fairly quickly, I didn’t know why I had worried about being on the aeroplane for so long. However an hour later, I found myself inadvertently adopting a new persona. Picture Tigger from Winnie the Pooh on a long-haul flight and you’re not far off! Because, maybe it’s just me, but there’s something about knowing you have to sit for such a long time (even if you do stretch your legs) which makes you want to be doing anything but sitting still. I also had a massive struggle with sleep, which I think was because I could not trick my body into believing that it was in a natural sleep-like horizontal position (as you normally are in a bed or in a sleeping bag). I’ve discovered in the past that I can’t sleep in cars or on trains, and I can now add to that as I couldn’t sleep at all on an 11 hour flight! However, feeling sick with tiredness couldn’t numb how excited I felt when I first spotted the islands of Hong Kong and their skyscrapers from the sky. And whilst I really struggled with jet lag during the late afternoon, taking a nap and having some food helped me feel more human again.

This is a tough one because as previously mentioned, tiredness and jet lag have definitely been affecting me today. Also, I’ve not done too much exploring yet! But on first impressions, so far so good.The places I’ve seen have a brilliant buzz, the metro system is efficient and shop and café fronts are so much more colourful than what I am used to back in the UK. Although I have caught sight of a few protesters from a distance, this isn’t really something I wanted to focus on as my blog across all counties is intended to be from a tourist’s perspective surrounding food and attractions. I make this point just because I know a few people might have stumbled across my blog post under the category or tag “Hong Kong” and expect to see a minute-by-minute account of what’s happening politically. Nonetheless, I hope you found some interest in what I had to say 🙂